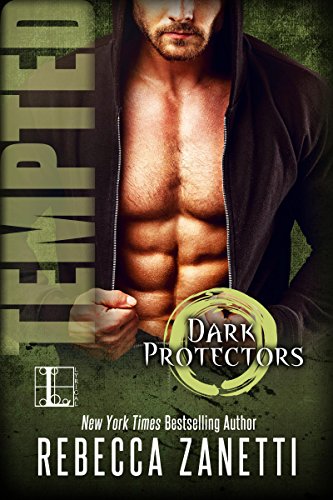 On the run from a mental institution and her vindictive half-brother, it’s safe to say that Sarah Pringle’s happy life as a schoolteacher is on hold. Too bad that as far as self-defense goes, “run and hide” is the best she’s got. And with the monsters that started her escape hot on her heels, that’s not going to cut it for long…

That is, unless Sarah has a bigger, badder, hotter monster on her side. Max Petrovsky is right at the top of the list of alpha male ass-kickers. And he knows exactly what Sarah’s up against. Good thing, because the minute he sees her something primal kicks in, turning everyday attraction into red-hot desire. As long as they’re cooperating, why not mix some pleasure with business? Of course, Max should probably tell Sarah he’s a vampire himself…

Their sworn enemy had declared war again. He had known it would happen.
Max Petrovsky settled in the leather chair, his gaze on Dage Kayrs. Being in an office, any office, made his shoulders twitch. He belonged on the battlefield and not in the king’s underground headquarters. “I’m ready to go, King.”
“Yes. You’re always ready to go.” Dage leaned forward, resting his elbows on the onyx desk, western oil paintings lining the wall behind him. “I had hoped to avoid war for another century, but the Kurjans haven’t given me a choice.”
The bottom-feeders would die. “Then I should get going— take them out in my home country.” Not that the United States hadn’t been good to him. Max liked it, but he also knew the strongholds at home, good old mother Russia. Although he hadn’t been back in centuries, the hills where he’d hidden from his drunken father were embedded in his memory.
“You’ve been working alone for too long.”
They’d had this discussion before. “I am alone.”
Fire lanced through Dage’s eyes at Max’s words. Or in remembrance of the condition in which the king had found him in his youth, nearly two hundred years ago. Bleeding and broken. “You haven’t been alone since the day you joined my family.”
“I know.” Max was grateful and would die protecting Dage or his brothers. He’d killed for them and had no doubt he’d do so again. But he wasn’t family.
“You are too family, you asshole.” Max let a rare grin loose. “Must be. You only swear at family.”
The king also tried to stay out of most people’s brains— damn mind reader— though family was never safe from his concerned probing. Dage cleared his throat. “About that. I, ah, have an assignment I’d like for you to consider.”
Max waited. The leader of the most powerful beings in existence took his measure. “As you know, my brother Talen has taken a mate and is currently in West Virginia working with the feline shifters. His mate has a psychic human daughter, who is now here at headquarters.”
Unease tickled Max’s nape. He’d heard about the four-year-old, and how the Kurjans declared war to find her. “Yes.”
“She needs a bodyguard.”

Oh, hell no. “Dage, you can’t be serious.” Max was a soldier. . . even looked like a killing machine. No way should a small child be anywhere in his vicinity.
“Just check her out— give me your opinion. Tell me if there’s anyone you think would make a good bodyguard.” Dage stood, no expression on his hard face. “I merely want your opinion.”
Max stretched to his feet, trying to read the king. His unease increased. “All right.” He tilted his head toward a screen lining one wall. “Show me.”

Monsters— big, white-faced monsters— chased Sarah through a lab made of stone. She cried out and backed into a cabinet, her gaze wide on the advancing Kurjan. His fingers morphed into needles. Big, dangerous, vampire killing needles. She screamed.
“Sarah. Milaya, wake up.” Gentle hands shook her shoulders.
The scent of cedar filled her nostrils. She opened her eyes, and the sight of male filled them. “Max.” She relaxed with a sigh.
Soft moonlight danced over his face, creating rugged valleys. One button held his shirt together, as if he’d grabbed it before entering the bedroom. He sat on the bed. “You had a bad dream.”
She scooted to a sitting position, resting her back against the upholstered headboard. Vibrations from a man reading a mystery novel wandered through her, and she shoved them away. Apparently the last person to touch the headboard had been alone. Thank goodness. She’d sat on the bed for a moment to think. Exhaustion sucked. “I fell asleep.”
“That’s good.” Max slipped off her tennis shoes with quick movements. He gently rubbed the arch of each foot, and she fought a groan at the exquisite pleasure.
“Go back to sleep— under the covers this time.” He placed her foot back on the bed and stood up, heading toward the door.
“Would you stay?” she asked quietly.
He stopped. His shoulders tensed, and he didn’t turn around. “I’m not in the mood for cuddling, Sarah.”
“Neither am I.” Something inside her calmed. He was big and strong. She wanted him— more than she’d ever wanted any man. “I’m in the mood for you.”

“For a novella this was brilliant, paced just right with just enough information not to leave the reader wanting. Both characters were perfect for each other with no unnecessary drama and the best bit – I got more than a peek or two of Conn and Jase.” FOUR STARS – Bev from Goodreads

“I LOVE this book!! What a absolute delight this series is. I love the hero and heroine and the plot just thickens and everything is just so tangled in desire and passion. A total must read!” Marie from Marie’s Tempting Reads

“This is what I was hoping for from this series! It focused on the couple, but did not ignore the overall storyline. They were both likable (although I already loved Max from book 1), hot for each other, the story moved fast (it was a novella)and had a happy ending! Yippee!”  — CC from Goodreads 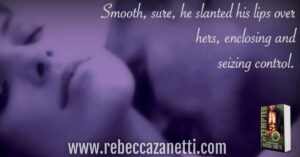 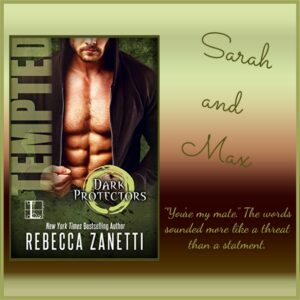