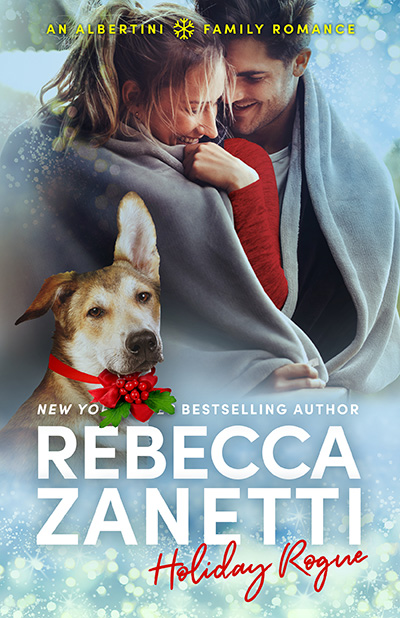 Danger and Mistletoe are a Deadly Combination!

Bosco Albertini learned the hard way that focusing on his career is a lot safer than investing in love. So when he meets his sweet new neighbor, he puts her firmly in the friend zone, despite her soft hazel eyes, sharp wit, and tempting curves. It soon becomes difficult to keep her there because his brothers, his Nonna, and even his dog already adore her—and he’s not far behind.

Marlie Kreuk accepts the friend zone from the too sexy soldier because, hey, when a guy puts you there, he’s a moron who doesn’t deserve more. But when danger comes for her and Bosco risks his spectacular body to protect her, she can’t help but wish for romance. Although, he’s going to have to work for it.

With danger all around, Bosco and Marlie must face their explosive attraction while defeating deadly attackers, but even that is nothing compared to handling the Albertini matchmakers during the Christmas season. Busting out of that friend zone and surviving will take all of Bosco’s training, Marlie’s courage, and the magic of the holidays.

A dog blocked the entrance to her apartment.

Not just a dog, but a massive mutt that stretched entirely across the doorway, on his belly, his nose on his paws. Slowly, he lifted his head to study her, his eyes a deep brown against the multitude of colors around his snout. Black, brown, white…a commingling of colors that gave him an uneven look.

Dogs were cute. They were fluffy. This one looked dangerous.

Marlie faltered a few feet away, snow still clinging to the top of her boots, and then looked the closed apartment doors on either side of her. The converted turn-of-the-century house held three apartments, and hers was at the far end. Guarded by a dog so ugly he was adorable.

He yawned and flashed sharp and deadly teeth.

She swallowed and took a step back. This was so weird. How had he gotten inside the house? She’d had to unlock the front door to even make it inside to the hallway. “Um, hello?”

She looked at the closed doors on either side of her and reached out to knock gently on the one to the right, not wanting to startle the beast. No sound came from within. So, she moved to the other side of the hallway and knocked, keeping her gaze squarely on the animal. He seemed mellow enough, but he had to weigh around a hundred pounds and had seriously sharp teeth. No answer came from the second door, either.

Breathing in, she slowly exhaled. “Um. All right. Okay.” She moved forward a couple of steps just to see if he reacted. He didn’t. “So, um, you’re in front of my door.” She kept her voice gentle and non-threatening.

“I’ve never had a dog, but we’ve had cats and fish through the years.” She took several steps closer. “I need to get inside, and you’re in the way. So, if it’s okay, how about I gently reach over you and unlock my door?” Fishing her key out of her bag, she held her breath and unlocked the door, opening it and pushing open. “Good boy,” she murmured. “Or girl. My guess is boy.” She caught her breath. “I’m going to step over you—”

The dog stretched to his impressive height, turned, and sauntered right into her apartment.

He scouted the boxes set neatly against the far wall of the living room, his tail wagging.

“I don’t have furniture yet.” She moved in behind him, keeping the door open. Should she call the dog catcher? The animal looked healthy and well kept-for, so certainly he had a family. “I just can’t figure out why you’re here. How you got here.”

He ignored her and continued scouting through her boxes.

The outside door opened, and Marlie turned, her breath really catching in her throat as a man loped inside the building. The winter sun poured in behind him, shrouding his face, but he filled out the space nicely with hard packed muscle.

He paused. “Fabio?” His voice was a low rumble that slid right over her skin.

The dog barked once and bounded out, heading at full speed toward the man. The guy crouched and took the full impact of the hit, wrapping his sinewed arms around the animal and chuckling. “I missed you, too.” He vigorously scrubbed both hands through the dog’s fur and then stood, moving toward her.

She instinctively stepped back and then stopped herself.

“Hi.” This close, his features took shape, and man, what features he had. His hair was a shaggy light brown, his eyes a golden brown, and several cuts and scrapes looked at home on his angular features. It looked like he hadn’t shaved in a few days. He wore an olive-colored shirt and camouflage pants with matching boots, all of which stretched nicely across a body honed for muscle and strength. A battered hat with an Air Force emblem on it covered the mass of hair.

“Hi.” She swallowed and looked down at the happily panting dog butting against his leg. “Fabio?”

“Yeah.” The guy held out a hand. “Sorry about that. My brother is going out of town for the week and dropped him off an hour earlier than he was supposed to so we could hang. Usually, Fabio just waits at my door. But he likes people, and he loves mysteries.” He angled his head to see past her to her rows of boxes.

She faltered and then accepted his calloused hand. “Oh.” Warmth instantly slid up her arm.

“Bosco Albertini. Happy Monday, and it’s nice to meet you.” That intense gaze shot right into her eyes, and all sorts of feelings headed south.