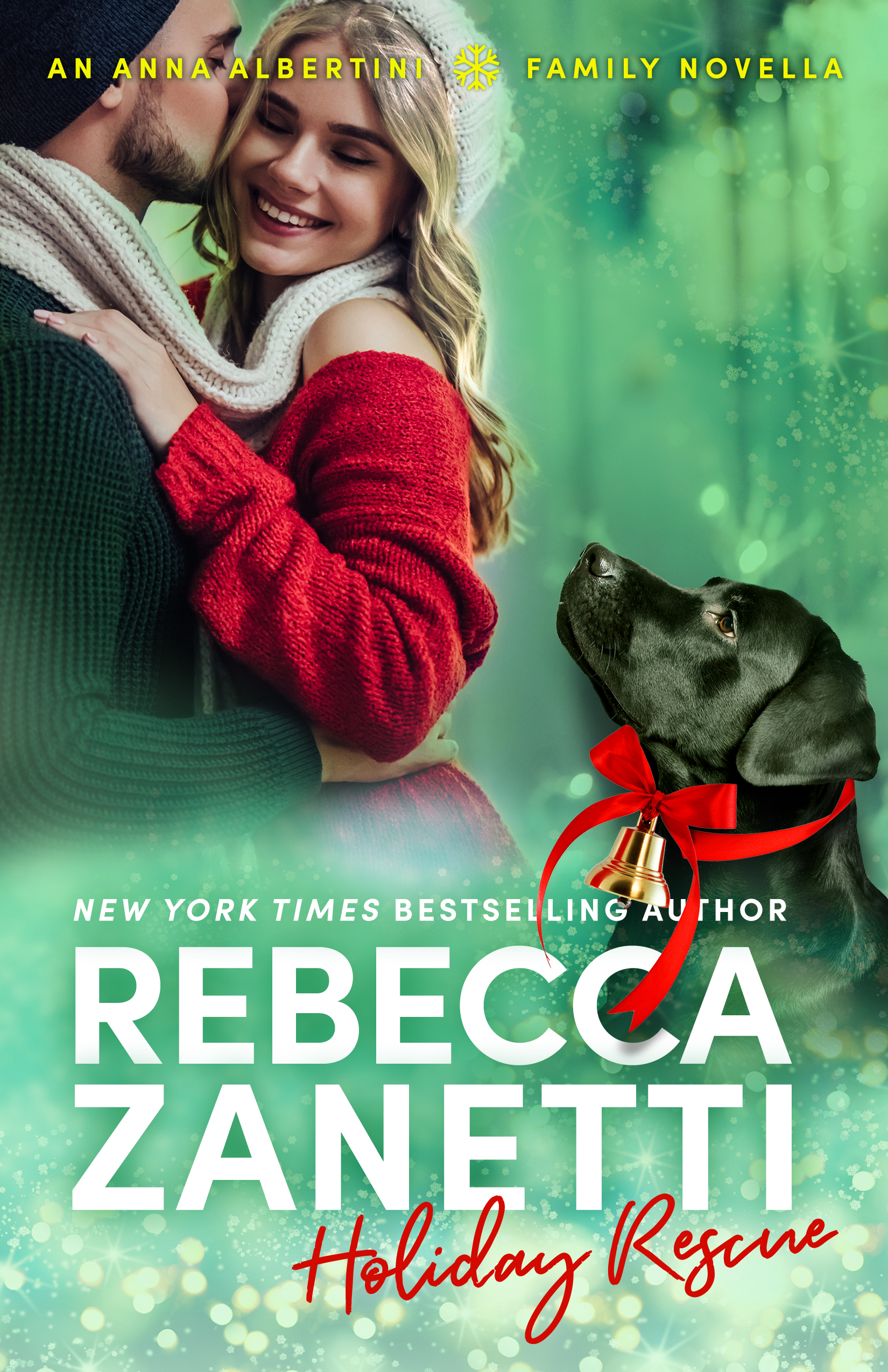 The Albertini Family is Back in this Holiday Romance!

Quint Albertini likes his life as a smokejumper and search and rescue expert. He has his dog, his friends, and his freedom. He’s had it with women who can’t commit or who want him to change, and now all he has to do is dodge the family match-makers so he can live his peaceful life when he’s not leaping head first into danger.

When Heather Davis gets trapped on a mountain during a wild winter storm, her carefully laid plans of safety and security go right out the snow filled window. Her saviors, dog and man, quickly capture her heart, even though she’s trying to remain under the radar from a disastrous past that seems to keep coming for her.

While Quint and Heather try to ignore the blazing hot attraction between them, the Albertini family has no intention of letting a possible romance fizzle out—especially during the magical holiday season.

A wet nose touched Heather’s, and she opened her eyes to see the prettiest brown eyes imaginable. Large and soft with a sparkle of puppy adoration and triumph in them. The dog licked her chin, sat on its haunches, and barked three times.

Heather blinked freezing snow out of her eyes and sat up straighter against the solid tree trunk, trying to get her bearings. Her butt and legs were chilled from the frozen ground. She must’ve drifted off beneath the sweeping pine boughs after pressing her personal locator beacon for help.

Pain ticked through her head, and she gingerly tried to move her injured ankle, biting her lip at the agony. That’s right. She looked over her shoulder at the rocky and icy terrain she’d fallen down after slipping on the trail near the top of the mountain. Her pack was next to her, and she patted it, wincing as wet snow splashed up. Then she focused on the quietly panting Black Labrador. “Hello.”

The dog’s tail wagged across the snowy pine needles. It wore a bright red Search and Rescue vest along with a wide collar with a box that had a blinking red light. Heather had fallen into some sort of gulley, surrounded by trees with one very rocky edge heading back up to the main trail. The rocks were black slate, icy, and sharp.

A whistle sounded from up above, and the dog barked three more times before laying down with its nose on its paws right in front of Heather. Snow scattered.

“Good girl, Zena,” came a masculine voice. “Hello? Can you hear me?”

Heather angled around the tree and tried to look up and beyond the jagged rocks. “I can hear you.”

“What are your injuries?” The man was tall against the rapidly darkening sky, and his face remained in shadow.

Heather swallowed. “A few bruises and I think a broken ankle.” There was no ‘think’ about it. “It’s broken for sure,” she yelled, trying not to shiver. Was she going into shock?

“All right. Two of us are coming down, so stay behind that tree in case we loosen rocks or ice,” he called down, his tone remaining calm.

“Okay,” she chirped. Then she hunkered down behind the tree. Oh, she’d definitely expected danger to come her way, but not out by herself scattering her grandma’s ashes on the mountain top. She’d worry about her disastrous life later. For now, she studied the rescue dog, which had the loveliest black coat she’d ever seen. “Zena, huh? You do look like a warrior princess.”

The dog kept perfectly still, watching her as if she didn’t want her prize to wander away. Her brown eyes were alert and smart, and she vibrated as the rescuers maneuvered down the large rocks toward them. Her training was as impressive as her obvious intelligence. Snow landed on her nose.

Heather listened as sure steps made their way down the craggy rocks, and soon a man stood before her. She’d been wrong. He had the prettiest eyes she’d ever seen. They were a tawny brown, lighter in the middle of the iris, the color spiking out into deep chocolate rims. “Hi.” He dropped to his haunches to study her face.

Maybe she was still unconscious because no way was this guy real. Dark and mussed-up hair swept away from a rugged face with more than a couple days of whiskers across his edged jaw. His chest was broad, his hands wide, and his gaze intent. “Hi,” she whispered.

The dog perked up and moved to the man’s side, tail still wagging.

He patted the dog’s neck. “You’ve already met Zena, and I’m Quint Albertini. Want to tell me what happened?”

Albertini? Yeah, he looked Italian. “I was hiking down the trail and slipped.” Then she’d tumbled over the rocks, bruising herself, until landing next to the tree. “I think my ankle is broken.”

He reached for a flashlight in his pack and shone it at her foot, which she’d already wrapped before putting a warmer at her toes and struggling to wear another sock over it all. “Looks like a solid wrap.” He looked at her hiking boot, which was near her pack. “Good idea taking the boot off before the ankle got too swollen.”

Another man jumped from a rock and landed. This guy was also in his late twenties, maybe early thirties, and had dark brown hair and strong features. Like Quint, he wore hiking clothing, a red Search and Rescue vest, and a backpack. “What do we have?”

“Broken ankle,” Quint confirmed. “Her eyes are clear and I don’t see signs of a concussion.” He leaned toward her. “Are you hurt anywhere else?”

“Just bruised,” she admitted. “I’d walk but can’t put any weight on the ankle.” There was no way to hop back up the rocky embankment to the trail.

Quint looked over his shoulder. “This is Rory, my brother.”

“Hi. I’m Heather,” she said, the cold starting to get to her. She shivered.

Rory grinned. “Great job taking the PLB with you. Most hikers aren’t that careful.”

“I was hiking alone,” she said. “So I figured having a personal locator beacon was just smart.” She’d hit the panic button the second she’d landed and regained her pack.

Quint looked closer at her ankle. “As well as boot warmers, extra socks, and granola bars?” The remains of a wrapper stuck out of a pocket of the backpack.

The wind sped up and splashed water off boughs toward them.

Rory peered up at the bruised looking clouds. “I know we’ve had a really late and light winter, but hiking Storm’s Peak in December is a bad idea. There’s another storm moving in, and we need to get going.” He reached for a radio and told somebody that they’d found the hiker. Then he paused. “Do we need the litter?”

She knew from her research that a litter was the stretcher rescuers used to carry an injured person down a mountain. While December wasn’t a good month to hike, she’d had to wait to get the permits for her grandmother’s ashes, and it had looked like the storm would hold off for another couple of days. The local weather forecast had been incorrect.

Quint looked her over, and her body somehow warmed. “I’d prefer not to use the litter. The terrain is too rocky and slick.” He leaned in. “In cases like this, it’s a lot easier to piggy you out. Are you up to it?”

Her eyebrows rose. “You want to give me a piggyback?”

Rory chuckled. “It is the easiest way, and we do it all the time. The question is if you can hold on.”

“Good.” His gaze lightened. “It’ll be a lot easier to climb up these boulders if you’re on my back.”

She breathed out and tried to sound cool and not like a love struck teenager. He was going to carry her out? Flutters wandered through her abdomen. “All right. Let me take off my other boot.”

“No.” She tried to sit up straighter. “It’ll be easier for me to balance with both boots off, and that way, I won’t keep kicking you.” She winced. “I’ll apologize now for the late season huckleberry milkshakes I’ve been eating all week. I’m sure I was five pounds lighter last Monday.”

His smile warmed her enough to push the sense of shock away.

Love the Anna Albertini series and this side story adds more depth to this wonderful family. More please! EBook Obsessed

This short novella really packed a punch, or a wallop with a wooden spoon…  Holiday Rescue is a must read and a perfect addition to the Albertini series! Bourbon, Books and Brenda’s Review

Holiday Rescue by Rebecca Zanetti is 100% holiday charm. From the first word to the very last, it may be my new favorite holiday story ever. Sweet, heat, fun and family, this standalone novella has it all. Catherine

A perfect snack while waiting for Rebecca’s next huge release. BuffyAnna.Canada

I just love this series! One of the best parts of the book are the witty characters & their banter. I love the interactions between all the characters. This book is full of wit, interest, suspense, and romance. I look forward to the next book! Paulsenh

HOLIDAY RESCUE is a quick read; a fast paced story of family and friendships, rescue, recovery, obsession and love. The premise is engaging and intriguing; the romance is seductive; the characters are numerous and energetic.  Sandy Sch

I was immensely happy with Holiday Rescue! Cute, fast paced, sexy and fun with a perfect mix of suspense and humor with a family of Albertinis I adore!  Marie’s Tempting Reads 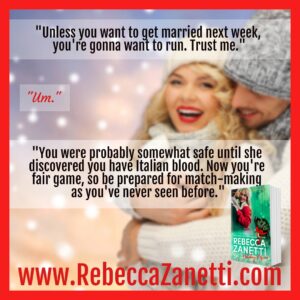 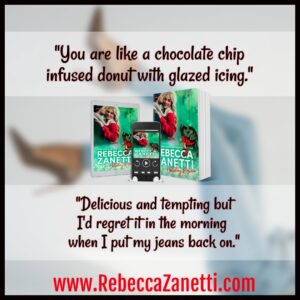