The Dark Protectors have Returned…Get a Free Booklet! 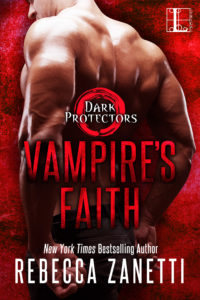 So, we’re counting down the days until Vampire’s Faith releases on Tuesday (June 19th)!  This is a huge return to the Dark Protector series, but it kicks off a whole new series arc, so it’s a great place for new fans to jump into the world of the Realm.  Existing fans will see some folks they recognize, too.  🙂

For anybody who preorders the book, we’re offering a free booklet of Zane Kyllwood and Janie’s romance up until Marked, which is their book.  Even if you haven’t read the earlier books, it’s a fun read to see how their childhood friendship develops into an adult romance.  But, and I can’t stress this enough, we’re only offering it to people who preorder Vampire’s Faith.  We won’t be giving it away afterward like we have with other free content.  At least not for a year or two.  Here is the link to fill out the form to receive the booklet.  The booklet will be sent about a week after release day.

Info on Vampire’s Faith is below, and for those of you who have questions, let me tell you that Vampire’s Faith takes place right after the Epilogue in Marked, when Hope is seven years old.  Dage is still king, whether he likes it or not.  LOL!  :). Also, Ronan is not Dage’s son or dad.  You’ll understand when you read the book.  Enjoy!!!


10 thoughts on “The Dark Protectors have Returned…Get a Free Booklet!”