Contest for free books and Updates! 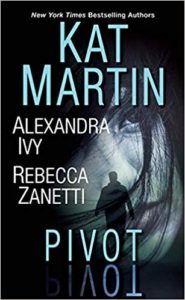 Happy Holidays and end of 2019!  I haven’t blogged much this year and hope to do better next year, but I thought I’d pop in and make sure you knew we were having a contest for an Advanced Reader Copy of PIVOT, which is an anthology I’m in next year with Kat Martin and Alexandra Ivy.  My pal, Asa Maria Bradley, is also giving away two copies of her upcoming release, Loki Ascending, which is awesome!  I read an early copy, and I really loved it!

Here’s the link to enter the contests, which are open world-wide, and will close on the morning of December 26th.

My novella in Pivot is from the Deep Ops series, and Wolfe makes an appearance along with Roscoe, who’s still dealing with some puppy drinking issues.  Other than that, as you might know, Hero’s Haven will release on January 21st, and it features Quade from the Dark Protector series.

How about a couple of excerpts?  Here’s one from Asa’s Loki Ascending:

She was almost done pulling the antidote from the vial into the syringe when the swish of fabric caressing skin made her look up. 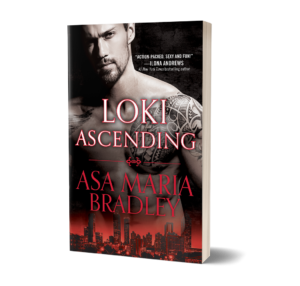 She had seen and touched his body many times while he’d been her patient. And she’d been drawn to his sleek physique then, but this was something completely different. His shoulders had somehow become broader. And the expanse of sun-kissed skin covering well-defined muscles was too much for her sleep-deprived brain to process. She stared at the narrow strip of hair that started below his belly button and disappeared into his jeans, the syringe and vial in her hands forgotten.

Her berserker growled and paced in tight circles.

Scott’s words brought Irja out of her stupor, but she had to breathe deeply before she could center herself enough to calm the inner beast.

“Yeah, fine. Just tired.” She tried for a smile, but judging by the worried look he threw her, it probably looked more like a grimace.

“You should rest before the evening meal.”

“I’ll try.” She finally managed to finish prepping the syringe and placed it on the table.

Scott reached for her hands, clamping them between his. “Irja, you have to take care of yourself. You are of no use to anyone if you drive yourself to exhaustion.”

She couldn’t meet his gaze. The heat from his hands touching hers distracted her to the point where she held her breath. She slowly pulled away from his grip and inhaled deeply. “You sound like my brother.” She tried for another smile.

“Pekka is not wrong.”

His dark eyes studied her, but she still couldn’t meet his gaze. He would see too much, and right now she was too raw to hold up her emotional walls.

“Let’s take a look at your shoulder.” She winced at the false perkiness of her tone but quickly stepped to the side so she could look closer at the back of his deltoid. As she leaned closer, she had to stop herself from deeply inhaling. He smelled of the soap he’d used in the shower, clean and citrusy. And underneath that, there was a unique male scent that made her think of open desert skies and dry winds.

This was ridiculous. He’d been her patient for almost a year back in Washington State. She’d never felt the need to sniff him before. She mentally shook herself back into reality and reason. Her inner warrior disagreed. It wanted to linger on Scott’s delicious smell and growled its disappointment when Irja forced it to stop scenting the air. Lusting after the queen’s brother was not proper. Even if he had not been her patient, Irja knew she was not a worthy partner to him. The beast resisted, but at least it calmed down and stopped pacing.

Irja swabbed his bicep with the alcohol pad and gave him the shot of antidote.

Scott’s jaw clenched as the needle went in. “I don’t think I’ll ever be a fan of injections,” he said in a low voice.

“I’m sorry. I wasn’t thinking.” Irja fumbled as she put the medical supplies in a plastic bag and dropped them into a trash can. She shook her head. “That was so insensitive.”

“You weren’t insensitive. I get that you’re doing this to take care of me.” His dark eyes were intense. “It’s not the same.”

He didn’t have to tell her what he was thinking. While captive in the lab, Scott and Naya had endured shot after shot of toxic chemical cocktails that would supposedly make them into super soldiers. Irja should have known better than to just jab a needle in him without warning.

“Let me just have another look at the shoulder,” she said when the pause in conversation became loaded with too much tension.

Scott hissed when she prodded the injury. “I guess it’s a little more serious than I let on.”

Irja studied the puncture wounds. They had stopped bleeding and looked clean. “I don’t think the claws hit anything vital. It looks like muscle damage only.” She placed her fingers on the injury and closed her eyes briefly. Although she never used powers to heal anymore, her sensitivity to magic allowed her to detect what she thought of as “troubles.” If a wound was infected or if an injury extended to vital organs, she could sense the body’s distress and pinpoint the underlying cause quicker. Scott’s injury didn’t give off any troubled vibes. “These should heal fine on their own.” She withdrew her fingers and had to once again clamp down on her connection with the berserker as it hissed its disapproval when the skin-to-skin contact ended.

She’d never had these types of control issues with her inner warrior before.

Scott stood, and Irja stumbled as she took a step back to get away from all that delicious bare skin.

He grabbed her elbow, and to her horror, she swayed toward him. She had to put a hand on his chest to steady herself and avoid smacking her nose into his collarbone. Heat traveled from where her palm touched his skin and up her arm. The air between them crackled with electricity. Her nipples tightened into hard peaks. Heat pooled low in her abdomen and then moved even further south. The berserker threw back its head and howled in approval.

There was no external sound, but under her palm, Irja felt an echo of that growl vibrating deep in Scott’s chest.

She looked up to find him staring at her, shocked.

“What the fuck just happened?”

She had no idea. “I need sleep,” she whispered, her voice cracking. She had to get away from him before she completely lost her mind.

She quickly gathered up her medical bag and fled the room. Scott called her name, but she ignored it.

If she had to drug herself into slumber, she’d do it. Anything to regain control and composure. Bad things happened to people whenever she lost control, especially if she cared about them.

Here are some buy links for LOKI:

And, here’s a fun excerpt from Hero’s Haven:

Haven stood up and pinched her arm.  Nope.  Not sleeping.  Maybe in a psychotic state? 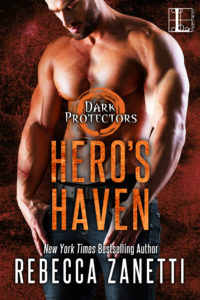 “The fire burned out in your moving blue shelter outside.”  Quade stood in the doorframe, his shoulders touching each side, the blanket wrapped around his hips.  His chest and abs looked as if there was a steel chest plate right beneath his skin.  Hard and ridged and beyond masculine.  Four scars, deep slashes, cut over his heart.  What had attacked him?

Man, he was tall.  And broad.  And seriously dangerous looking.  She shook her head and tried to focus on his words.  “The heat stopped in the Jeep?  Yeah.  We’re out of gas.”

He looked around the cabin and stepped inside, his eyes stark and his hair a wild mass around his head.  A gust of wind sprayed snow inside.  He moved closer and shut the door behind himself, his gaze not leaving hers.  “Are your people anywhere near here?”

Her voice took a moment to work.  “I don’t have people.”

One of his impossibly dark eyebrows rose.  “You are a demoness, no?”

Shock and pain slashed into her so quickly, she swayed.  “No.  I am not a demon, nor am I possessed.”  How dare he?  The memories of those times her family had tried to exorcise demons from her still caused her night terrors.  “You’re a demon,” she snapped.

He straightened.  “Well, just half.”

He kicked snow off his bare feet and strode toward the fire.  “I’m half vampire, half demon.  I assumed you knew that.”

“Huh.”  She nodded, her shoulders going down.  “That’s it, then.  I’m totally crazy.”  She’d been told she’d eventually go insane, so it wasn’t a huge shock.  As a delusional state, it wasn’t bad.  The fire was nice.

“You could be crazy,” he agreed.  “Most demonesses are.”  He glanced down, way down, at her.  “But you have one black eye and one green, and your hair has some honey in it.  Purebred demons have all black eyes and white blond hair.”  He turned toward her and dropped his head, sniffing her.  “Interesting.”

Her breath caught, and she took a step back.  In her haste to leave the motel earlier, she’d forgotten her colored contact.

He reared up, his eyes widening.  “Holy hammock.  You’re half fairy?”

“Fairies are crazy, even more so than demonesses, which is nearly impossible,” he muttered, also turning to face the fire.  “No logical person would ever want to be a fairy.  A demoness would be preferable, though barely.  Surely you know that.”

“Nope.”  She might as well kick back and enjoy this delusion.  The man did have a spectacular body, so at least she’d have something to draw.