Several months ago, my phone rang, and it was Julie Kenner on the other end of the line.  She and Dee Davis had created this awesome soap opera, and they were having authors write different episodes in novella form.  She asked if I was interested, and I said DEFINITELY.  I mean, how fun is that?

The setting is Storm, Texas…and we have scandal, love, sex, secrets, good girls, bad boys…you name it, and it’s in here.  The first episode was written by Julie, and it will release on the 24th.  Then each episode will release a week apart until the finale…and then we’re on to Season Two.  I wrote episode 6, which is called Take the Storm.  All of the episodes are available for preorder, and the links are at the bottom of this post.

Welcome to Storm, Texas, where passion runs hot, desire runs deep, and secrets have the power to destroy…

Nestled among rolling hills and painted with vibrant wildflowers, the bucolic town of Storm, Texas, seems like nothing short of perfection.

But there are secrets beneath the facade. Dark secrets. Powerful secrets. The kind that can destroy lives and tear families apart. The kind that can cut through a town like a tempest, leaving jealousy and destruction in its wake, along with shattered hopes and broken dreams. All it takes is one little thing to shatter that polish.

Reading like an on-going drama in the tradition of classic day and night-time soap operas like Dallas, Dynasty, and All My Children, Rising Storm is full of scandal, deceit, romance, passion, and secrets.

With 1001 Dark Nights as the “producer,” Julie Kenner and Dee Davis use a television model with each week building on the last to create a storyline that fulfills the promise of a drama-filled soap opera. Joining Kenner and Davis in the “writer’s room” is an incredible group of New York Times bestselling authors such as Lexi Blake, Elisabeth Naughton, Jennifer Probst, Larissa Ione, Rebecca Zanetti and Lisa Mondello who have brought their vision of Storm to life.

So get ready. The storm is coming. 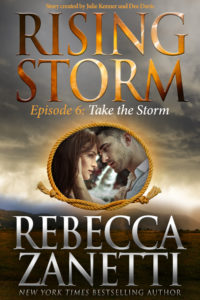