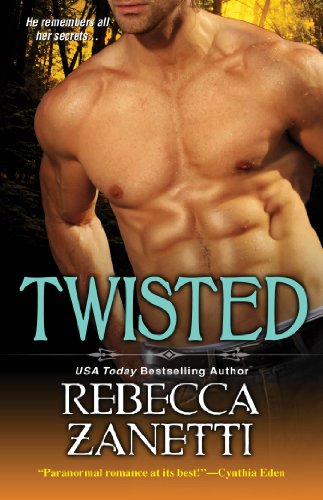 Terrent made the split decision to shift from wolf to man just in time to smack into the woman and start twisting through the air.  He timed the movements so he’d hit first, calculating the distance and ground cover.  Tucking her close, he allowed his right shoulder to impact, immediately rolling over several times and keeping her off the ground.  The pain didn’t hit until they’d finally stopped.

He took a deep breath, mentally dispatching healing cells to the muscles and tendons.

God, she was cute.

Her breasts glowed in the moonlight, and she was sitting smack on his groin.

Suddenly, he forgot all about his shoulder.  “Why did you shift?”

“I couldn’t help the change.”  She ran her palms down his arms, obviously searching for injuries.  “I’m still regaining my strength from having the virus for so long, and sometimes I can’t hold the wolf form.”

His eyebrow lifted. “Maybe you should’ve told me that before we climbed rocks.”

“Um, yeah.” She bit her lip.  “But I was having so much fun.  You don’t like heights, anyway, so I wouldn’t have thought to tell you.”

“I don’t mind rocky hills when I’m in wolf form.  But flying? Or climbing trees?  Or, God forbid, high-rise buildings?  No way.”  Then he waited for reality to hit her.

She finished patting him down and relaxed, her knees on either side of his hips.  Straddling him.  All movement stopped.  Her pretty brown eyes widened.  A lovely pink flush rose from her breasts to her face.

He expected her to scramble off him.  To stutter. Instead, she tilted her head to the side and slowly, so damn slowly, flattened her palms against his chest.  A low purr rumbled up from her abdomen.

A wolf who purred. His head might explode, she was so damn perfect.

She wiggled a little bit.  Heat roared between his ears and down his spine.  He grabbed her hips to hold her in place.  “Ah, don’t wiggle.”

Her blush strengthened to a red that had to burn.  “Sorry.”

She wasn’t the only one wondering.

He slid his palms up her flanks, ignoring the pull in his injured shoulder.  It’d heal within minutes.  Her skin was smooth and so damn soft.  He remembered how soft.  It had been hell leaving her in safety the last decade while he hunted the additional werewolves created during the war. He’d had a job to do, and he’d done it.

She ran her hands along his ribs, a small smile tilting her lips.  “You’re so big.”

He outweighed her by a couple hundred pounds.  When they’d dated before, she’d liked his size.  Before she’d been taken and infected with a virus by their enemies. Did soldiers scare her now?  Rage ripped through him, but he forced his anger down.   “I won’t hurt you.”

She nodded, absorbed in watching her hands drive him crazy.  “Why the one fang?”

“Huh?”  His anger dissipated in a flash.

“The one fang mark on my butt.  You have two fangs.”

Oh.  “I had broken one off in a fight with a werewolf earlier that day.  It took about a week to grow back.”  Probably a good thing, too, or he would’ve marked her.  Not that he wasn’t going to soon.

“What, Maggie?” He tried to gentle his voice, but her tight little body on him had the words emerging guttural.

“I don’t remember how to do this,” she whispered, her gaze on his collar bone.

His heart flipped over.  Jesus. She might as well cut it out and wear it for a hat.  The little organ—and anything else he had—belonged to her.  The sexy, cunning, pretty little wolf had a sweetness to her that shocked him, considering what she’d gone through.  He wanted that sweetness to wrap around him and never let go.