Talk about a Wicked Kiss! 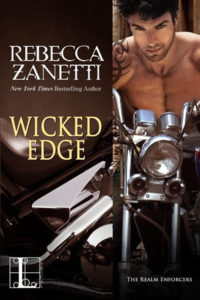 Hi all!  Wicked Edge releases on Tuesday (feel free to pre-order, LOL!), and I thought it’d be fun to have an excerpt here today:

The elevator door opened, and Daire clamped his hands on Cee Cee to keep her in place down the hallway and while he kicked open the door to his penthouse. Not wanting to wait another second, he took her lips, kissing her hard and taking her deep. A growl rose within him, a testament to his species, and he didn’t care.

He kissed her long and hard until neither one of them could breathe, and then, only then, did he lift his head.

A flush covered her face, and desire danced across her skin, the intensity of it palpable. Slowly, her chest moving as she panted, her legs released him, and she slid down his body. “You’re something, Daire Dunn,” she murmured, her hands going to her jacket.

He breathed in her scent, feeling it seep under his skin. “Take off your clothes.” They might as well get the parameters of the night straight now.

She smiled, a siren’s dare, and reached for her lapels. “I do like how you kiss.”

She gave a half nod. Regret twisted her lip.

The tiniest flash of silver. She dodged forward, much faster than he would’ve thought, and stuck a needle in his arm, plunging instantly.

He roared and flew back, striking out. His knuckles impacted her chin, and she crashed toward the wall. Sizzling sparks shot through his veins. Gray covered his vision, and as hard as he tried to remain standing, gravity won. The last, bizarre thought he had before his face hit the cold marble floor was a hope that he hadn’t hurt her.

The world fuzzed. He lay on the ground, fighting to move, urging his brain to kick back alive. Sounds morphed in and out as he lay not feeling anything. Sounds, muffled and unclear, echoed back from other rooms.

Cee Cee leaned down and brushed his forehead with soft lips. “I’m sorry.”

The touch awoke something in him, and his hand unfisted. He growled low, and she jumped back.

“You’ll be okay by tomorrow,” she whispered, turning on one of those deadly heels and leaving the apartment.


2 thoughts on “Talk about a Wicked Kiss!”