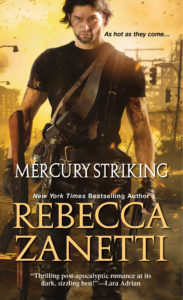 “Hands down, Jax Mercury is who I want to go through the apocalypse with. The whole apocalypse scenario is nothing new, but what really made Mercury Striking for me, was the man himself. Rebecca Zanetti wrote his character just right. The right amount of alpha maleness, mixed well with vulnerabilities that, even though he tries to suppress them, don’t come off feeling forced in order to make him a more relatable character. He doesn’t want to get too close to people because, like everyone else, he’s known loss in this world, yet he can’t help feeling a responsibility towards everyone in Vanguard.”  — Vampire Book Club

“It’s an engrossing mixture of sci-fi apocalyptic contagion and a couple finding respite in the heat of battle. One of Zanetti’s best works to date.” — KT Book Reviews

“Zanetti has two very powerful characters that bring this story to life. The hostile world climate is on the brink of imploding and you can truly believe Jax and Lynn have what it takes to survive but I wasn’t 100% all in to them being a couple.” — Tome Tender

“This was an incredible book. Zanetti has created a realistic post-apocalyptic world with equally realistic characters who struggle to make everything work and I really liked that. Life is hard and unfair and you can either choose to accept that or do something about it.”  — Sofia Loves Reading