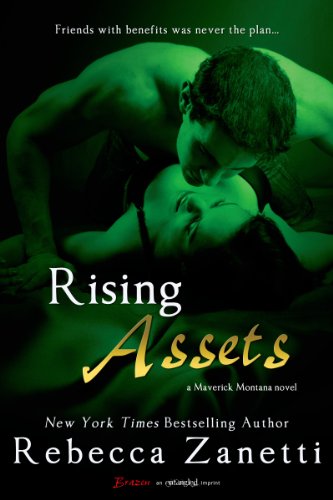 Friends with benefits was never the plan…Melanie Jacobs is in trouble. With three jobs—including running her ranch—and dwindling funds, she’s exhausted. Not to mention desperately trying to hide a secret. Unfortunately, her best friend Colton Freeze knows all too well that’s something is going on, and he won’t give up until he knows exactly what he needs to fix.Then Colton learns the truth—Melanie’s future happiness rests in the fickle hands of fate, and her chances for having a family are shrinking with every passing day. Her only comfort is Colton, but when a heated argument between them turns into an even hotter kiss, the boundaries of their friendship are erased, leaving only a scorching-hot hunger for more.

** “This was my first book in the Maverick, Montana series. I have to say, I’ll be going back and reading the other 2 books. Rebecca Zanetti sure does know how to write a dirty talking cowboy.” – Four Stars Cocktails and Books

** “Rising Assets was an enjoyable and heartfelt read with wonderful characters and some scorching hot sexy times.” – Four Stars – Lisa from Sinfully Sexy

** “OH MY! I LOVED this book from the first to the last page! The story line was FANTASTIC! The characters were PHENOMENAL ! I laughed, I cried, I smiled, I sighed.” Kathleen from Swept Away by Romance