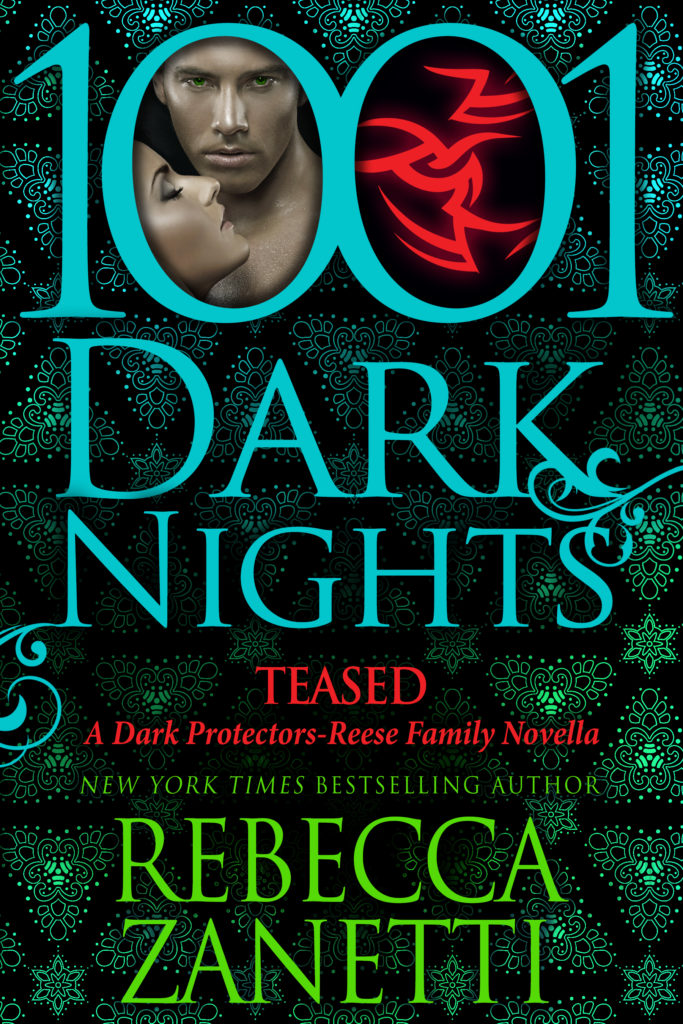 For almost a century, the Realm’s most deadly assassin, Chalton Reese, has left war and death in the past, turning instead to strategy, reason, and technology. His fingers, still stained with blood, now protect with a keyboard instead of a weapon. Until the vampire king sends him on one more mission; to hunt down a human female with the knowledge to destroy the Realm. A woman with eyes like emeralds, a brain to match his own, and a passion that might destroy them both—if the enemy on their heels doesn’t do so first.

Olivia Roberts has foregone relationships with wimpy metro-sexuals in favor of pursuing a good story, bound and determined to uncover the truth, any truth. When her instincts start humming about missing proprietary information, she has no idea her search for a story will lead her to a ripped, sexy, and dangerous male beyond any human man. Setting aside the unbelievable fact that he’s a vampire and she’s his prey, she discovers that trusting him is the only chance they have to survive the danger stalking them both.

Chalton Reese stepped smoothly around several women wearing Christmas garlands in lieu of clothing, ignoring their outstretched pamphlets. New York winter was setting in, and the wind was attacking the garlands, revealing way too much flesh. Street vendors hawked theater tickets to his left, and fluffy creatures from children books mingled to the right, trying to get tourists to pay for photographs.
Massive blinking billboards showing holiday sales bombarded him from all sides in a sensory overload that slapped him with an instant migraine.
He hadn’t been in Times Square for nearly six decades, and that wasn’t long enough. Not even close.
Yet the woman he followed hummed quietly beneath her breath, winding through the throng, a definite hop in her step. She had to be truly crazy to enjoy the crowd milling around.
He barely tolerated crazy, and he hated crowds. What he wouldn’t give to be in his secluded computer control room deep in the Idaho mountains. But no. When the king of the Realm ordered a vampire on a mission, a vamp went on a mission. Even if that guy hadn’t been on a mission in a century.
He hadn’t been away from his computers for decades. Like most vampires, he employed logic and order…and couldn’t for the life of him figure out why Dage had sent him on this mission. But the king always had reasons, and he usually kept them close to his vest.
Chalton stepped over a pile of what appeared to be chilidogs and hastened his step to keep the woman in sight. Olivia Roberts. A no-nonsense name with just a bit of softness. Unlike the woman. She was all soft and curves. Deep brown hair, light green eyes, and a figure that could literally stop a trolley cart.
He’d always liked curvy, and the beauty in front of him was overflowing with curves. Once again, he frowned, and a hot dog vendor jumped out of his way, fear sizzling from him. Chalton shook his head and tried to force his face into harmless lines. The last mission he’d been on had involved firing from a distance. Most of his missions had included guns, shooting, and death. But he’d given up the life of an assassin to become a computer geek.
Yet here he was in bone-chilling cold, surrounded by cement and glass, chasing a woman who filled out her blue parka like he’d drawn her on a notepad. Perfectly.
She clip-clopped on surprisingly high-heeled boots down a cross street, easily winding between people and stepping too close to moving vehicles. He calmly followed her, pleased to be finally getting somewhere. After watching her for two days just write news articles in her apartment, he’d started to wonder if she’d ever meet her mysterious source in person. He needed to find out who was feeding her information.
A dark van pulled up next to her, its windows blackened out. The side door slid open.
Hell. Chalton burst into a run.
A man wearing a ski mask reached out, yanked her inside, and shut the door before she could let out a scream. The van jerked to the right, horn honking, inching through the traffic.
Chalton reached it and grabbed for the door handle. Metal scratched his palm and cut deep. Bugger. It was locked. The rusty metal ripped away from the door, and he threw it to the ground.
The van veered away from him, hopped the opposite curb, and careened down the sidewalk. Bystanders yelled and jumped out of the way, spraying snow. A display of holiday T-shirts flew up in the air and crashed down in the middle of the street. The van continued on, horn blaring. Chalton jumped over a downed bicycle and ran after the careening vehicle, measuring the distance between it and the four-way stop up ahead along with the probability of an accident if the driver ran a red light.
He calculated the timing of the street light signals, catching view of a yellow light up ahead. Yep. It’d be red soon, and the van would run it. The woman probably wasn’t wearing a seatbelt. The van was older and weighed around six thousand pounds. It’d withstand an accident, but without a seatbelt, Olivia might get injured. He couldn’t let her get injured before he discovered her source.
Besides, after keeping an eye on her for a few days, he felt an odd sense of responsibility for her. The pretty brunette wouldn’t become harmed on his watch.
The van scraped against a brick building and sparks flew. People scrambled out of the way, throwing purses and shopping bags, dodging into the street. Horns blared, and vehicles screeched to stops.
He kept his heart rate slow and his mind sharp, maneuvering around frantic people while keeping pace with the van. Two cabs collided in front of the van, careening through ice, no doubt trying to get out of the way. The driver of the van hit the brakes, but it was going too fast and impacted the yellow taxis with a loud crunch of metal on metal.
One taxi driver jumped out of his cab, swearing loudly and rounding his car.
Chalton ran in front of the guy and grabbed for the van driver’s front door. Locked. The window was shaded so heavily he couldn’t see in, but the hair on the back of his neck rose. It wasn’t the first time he’d been in the cross hairs of a gun.
A muffled scream came from inside. Olivia.
He jumped up on the hood of the van, ignoring the hiss of steam coming from the engine. The front window was dark but not as dark as the sides. A shorter man sat in the driver’s seat with a SIG pointed straight at Chalton.. 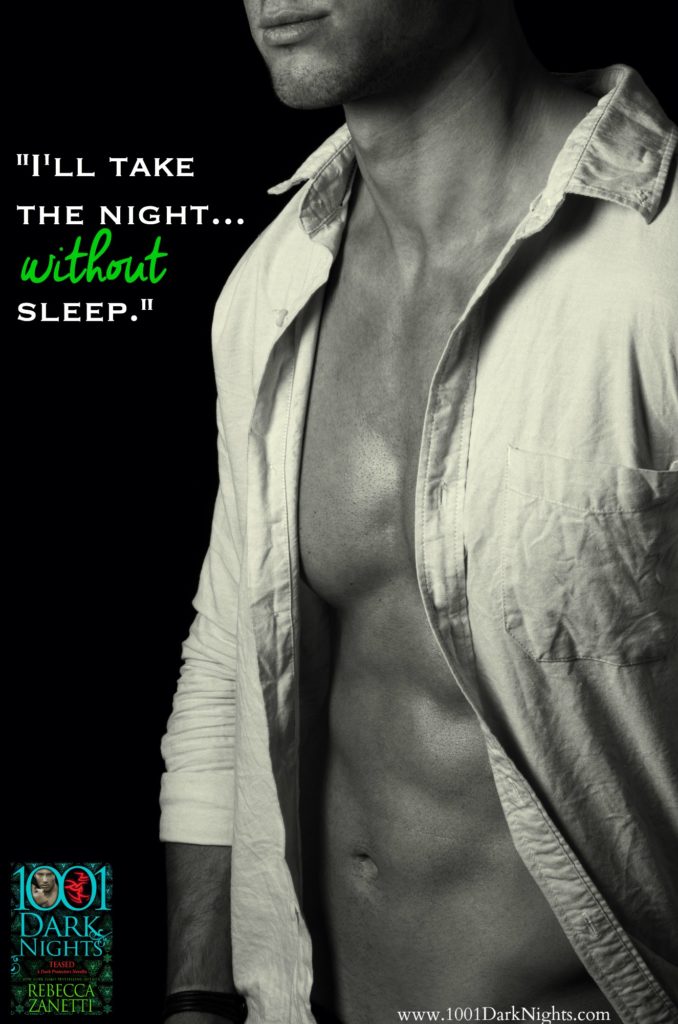 Fear tasted like copper in her mouth. Olivia leaned against the Jeep, her chest heaving, her brain misfiring. Fangs. Chalton had actual fangs, as had the pale-faced guy. Her knees shook, and she tried to lock them in place.
On the ground, Chalton breathed heavily, out cold.
Run. She had to run.
Theo sighed. He had Chalton’s size and dark eyes, but his hair was a shaggy brown around his collar. “There’s nowhere to go,” Theo murmured, tucking his gun in the back of his waistband.
Not true. If she could make it to the truck behind the Jeep, she could steal it.
“Listen, Olivia.” Theo strode forward and grasped Chalton beneath the armpits. “The guys on the ground are Kurjans, and they’ll torture you in ways you can’t even imagine if they capture you. More backup is surely on the way, and if you take their truck, they will get you. Come with me and you’ll be safe.” He ducked and tugged Chalton up and over his shoulder in a fireman’s carry, grunting with the effort.
She swallowed. “Ku-Kurjans?” The fangs could only mean one thing.
“Yep. Enemy of most vampires.” Theo turned to stride toward a slight opening in the snowy cornfield. “I can’t carry my brother and force you to come with me, so it’s your choice. Kurjans or vampires? Up to you.”
Vampires. Freakin vampires. And brother? So this was the younger brother. “Chalton is a vampire, and he’s your brother,” she said slowly, her brain just not working right. Shock? Yep. That was it. She was totally in shock.
“Yes. We’re vampires, we won’t hurt you, and we can’t make you one of us. Everything you think you know is just silly legend. Pretty much.” He crossed into the field. “Come or not,” he called back.
She glanced frantically around. The Kurjan Chalton had punched was beginning to stir. Was backup really coming? How could there be real vampires? Advanced species, sure. But legends were correct?
The guy on the ground groaned.
Her feet launched into motion before her brain could even make a decision, running after Theo. She had to get away from the Kurjans, and now, more than ever, she had to know more about the species. Vampires. The only way to follow the story and stay safe, for the time being, was to run after Chalton.
Leaves slapped her, but she caught up to Theo. “So he won’t die from the bullets?”
“No. He’s strong enough to push them out of his body within an hour, probably.” Theo didn’t turn around.
A relief she probably shouldn’t be feeling washed through her.
Her heels sank into moist earth, and small rocks tried to trip her up, but she scrambled after Theo, her heart thundering. How could it be true? Vampires. Real vampires. She’d been kissed by one.
Theo’s face was longer and a bit leaner…but no less handsome than Chalton’s. He moved with predatory grace as well. Maybe it was a genetic thing.
The smell of dirt and plants filtered around her, and the wind whistled somewhere in the distance. Strong moonlight allowed her to see the path, and when Theo took a sharp turn, she followed, stopping with a gasp at seeing a dark helicopter waiting quietly.
Theo turned and grinned. “I was going to make a bunch of crop circles to mess with Chalton but didn’t have time.” He shifted his weight, slightly jostling his brother. “Would you please look through your purse and pockets for a tracker? The Kurjans found you somehow.”
She blinked and rummaged through her purse. “There’s no way they could’ve gotten a track—” Her fingers brushed a smooth metal disk the size of a small battery, and she drew it out. “Well, hell.” One of the guys in the van must’ve shoved it in there. Smart bastards.
“Throw it,” Theo said.
She nodded and chucked it over several bare stalks. Life had gotten way too weird.
Theo reached forward and opened the back of the helicopter. “Get in.”

5* – “I absolutely love the Dark Protectors series and Rebecca can write the hell out of a vamp.”

The Reading Cafe –  “The premise is entertaining and intense; the characters are fun and charismatic; the romance and $ex is a quick build to a happily ever after-but then again, in Rebecca’s world of the vampire falling in love is always immediate and fierce. TEASED is a welcome addition to the Dark Protector series.”

Marie’s Tempting Reads – 5* – “Teased gets a SINFULLY DELICIOUS FIVE SHOOTING STARS! Sexy, dark, full of action, its a story that you will eat up again and again.”