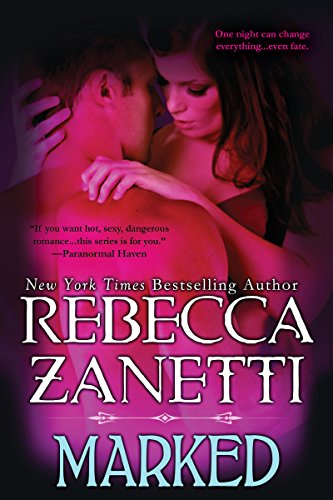 Janie Kayrs has known Zane almost her whole life. He was her friend in the dream world. She trusted him. But that was before he kidnapped her, spiriting her away to an isolated cabin to learn what her dreams never told her. Like how dangerous he looks. How he got on the wrong side of the negotiating table. And how much sexier he is in real life…

Zane is a battle-hardened warrior, used to command and solitude. But Janie has drawn him from the minute they met. His need for her could destroy everything he’s worked for, but the risk is too sweet not to take it. They call her the Chosen One. But when it comes down to the questions of peace or war, life or death, safety or passion, it will be Janie who makes the choice…

The present daySometimes destiny arrived with the crash of a bomb detonating in the trees.
Janet Isabella Kayrs perched on a rock wall facing the tarmac as men in full combat gear loaded helicopters. A young vampire had accidentally launched a rocket into the Oregon forest, but the blaze had already been contained. Unlike the smell.
Dawn began to peek over the horizon, bringing a flash of sunlight lacking in warmth. A breeze slithered through her black silk shirt, but she’d chosen carefully, and she didn’t want a jacket. Just in case she needed to fight.
Tension battled with oxygen, mingling with power. The vampires, each and every one, had a power more daunting than oxygen molecules. With destiny all but riding her, Janie fought to control her emotions. Indulging in fear would get her killed.
With a screeching protest, a heavily secured door opened to her right. She turned and forced a smile. “There’s my favorite firefighter.”
Garrett Kayrs, her younger brother, wiped soot off his forehead. “I helped put out the fire, but it wasn’t me.” He leaned back against the wall, long legs extended, worry cutting grooves next to his generous mouth. “I haven’t accidentally set off an explosive since the fifth grade.”
“I remember.” This time her smile arrived easily. “You were playing in the armory and blew up several trucks.”
“Dad was mad.” The understatement widened Janie’s smile. “Yeah, but he was amused, too.”
Garrett’s odd gaze sharpened as he watched a missile being loaded. “I don’t think you should go.”
“I know.” She took a deep breath and studied him. At twenty years old, the young vampire stood well over six feet tall. He’d inherited their father’s broad shoulders and rugged features, but the unique metallic gray eyes were all Garrett’s. She slipped her arm through his, impressed by the solid muscle. “I have to go.”
He shut his eyes, the cords in his arm vibrating with a dangerous tension. “Then I should be there.”
Janie leaned against him. With almost five years between them, she’d vowed to protect him at his birth. Even after he’d outgrown her when she’d turned twelve, she’d known how to make him laugh, how to ease the pressure he must surely feel as the sole Kayrs born in the new generation.
Vampires produced only male babies, and not very often. So far Garrett was the single progeny of the Kayrs ruling family.
“You’re needed here to protect headquarters,” she said. “And Mom.”
His massive body shuddered. “I’m torn.” Garrett lifted his chin. “I need to be here for Mom but want to be at the peace talks with you.”
In profile, he looked just as dangerous as their father. “I’m trained, Garrett.”
“You’re human, Janie.” Garrett hunched his shoulders forward. “No matter how well trained you are, you’re still human.”
Janie nodded. The breeze whipped around them, and she pushed hair out of her eyes. When her mother had mated Talen Kayrs, he’d adopted Janie. He was the only father she’d ever known. While she loved her family, she’d never lived a normal life. “Sometimes I forget I’m human.”
“I don’t,” Garrett said softly..

Janie waited while the guards finished sweeping the Realm’s secured cells in the mountain. Her family had been surprisingly accepting of her idea to speak with Kalin. In fact, when she and Zane had arrived at the conference room, they’d already started making a plan. Their trust in her abilities warmed her.
She couldn’t let them down.
Now she stood deep in the mountainous headquarters. She loved being inside the earth and let the sense of surrounding rock center her. Peace filtered through the earth that held them all so tight. Unfortunately, the peace failed to diminish the headache pounding at the base of her skull. She’d barely kept the agony at bay since contracting the virus, and the pain was becoming more insistent.
Zane, Talen, and Dage manned control panels in the adjacent room, recording everything.
The guards exited, and Chalton gave her a terse nod. Dage had decided to send in guards Kalin didn’t know and not family— not anybody Kalin knew. “We’ll be right outside,” Chalton said.
Sweat slicked her palms. She nodded and tugged down her bulletproof vest before striding inside and shutting the door.
Lighter brown rock made up the walls of a square room bisected in the middle by pure iron bars. A cot and toilet made up the cell. Kalin stood, dressed in a plain black jumpsuit, and drew near the bars. “Janet.” Satisfaction rolled his consonants.
“Kalin.” Her heart beat hard enough to rattle her ribs. She chose one of the two chairs on her side of the bars and sat, taking a moment to study him. “Please, sit.” Damn, he was tall. Almost seven feet. His black hair had grown out longer than the last time she’d seen him, the red tips seeming brighter. Green and purple commingled in his eyes. Gone was the boy who’d visited her dreams.
He sat gracefully at the end of the cot, his burned skin already healing. “Might you bring your chair closer?”
“No, I might not.” She had strict orders to keep out of arm’s length, and she was smart enough to heed them. Uncle Conn was the ultimate soldier, and he knew what he was doing.
Kalin laughed and glanced at her combat outfit. “Are you expecting to be shot?”
“No.”
“How many knives do you have hidden?” Curiosity darkened the purple in his eyes.
“Five.” He nodded. “Good number.”
“Thanks.” Her hands trembled, so she rested them lightly on her legs as she waited. Some of her training had included interrogation and interviewing techniques, and every instinct she had told her to let Kalin lead the discussion.
Kalin lifted his patrician nose and sniffed. “Ah. Peaches and . . .” He launched himself at the bars, wrapping long fingers around them. “You’ve contracted the virus.”

“I will end this with, this series MUST be read. It is brilliant, poignant, fast paced, action packed and dynamic. Loved every minute of it!!” ~ Tea and Book Reviews

“Marked was a fantastic conclusion to an amazing series, and as much as I hate to see it end I wouldn’t change a thing.“ Angels Addiction Book Blog

“Marked is a fast-paced, excitement-filled explosion of action that will not disappoint. Zanetti keeps getting better.”- RT Book Reviews, 4.5 Stars Top Pick
“This book – this entire series – is dynamite, just so well crafted. Kudos to author Rebecca Zanetti on putting the finishing sparkling touches on a story that celebrates love, family, and triumph.”– GraveTells Reviews

“…the action kept me revved from the moment I opened the cover to the time I turned the last page.” – Fresh Fiction

“Janie was sweet and sassy and determined to protect all those she loved – especially Zane – and their romance was a great backdrop for the culmination of this series.  I honestly couldn’t have been happier!” – The Window Seat 13

“I devoured Marked in a day and a half, and all the lingering questions I gathered throughout the series were answered, including the ever present question of What is Zane!” – Diaries of 2 Thick Chicks

“There was humor, pages of intensity, moments of joy, paragraphs of fear…and it was all twisted up in a wonderful reading package. Yes, it was that good.” – First Page to the Last Book Reviews

The ending is 100% satisfying in every way. Not only is the main arc wonderfully resolved and the romance full of HEA goodness, we get to spend some time with every single couple we have fallen in love with over the course of the series. – Goodreads

I loved this series and especially this last book. It wrapped up things nicely but left it open for a new series. – Goodreads

If you are a paranormal romance fan you can’t go wrong with the DARK PROTECTORS series and MARKED didn’t disappoint in the least.  – Goodreads

“Mrs Zanetti finished this series with such force that it will be read again and again. She knew how to keep us captivated with all these characters and never failed to keep it exciting and hot.: ~ Cocks and Tails Books

“This book was my introduction to Rebecca Zanetti, and I enjoyed it tremendously.”~ Avalon Book Reviews

“RUN for the Dark Protectors world and you will be one happy reader in 2015!!” ~Snarky Mom Reads