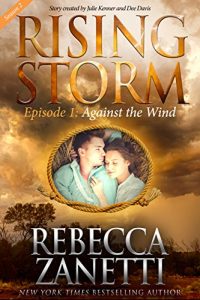 Welcome to Storm, Texas, where passion runs hot, desire runs deep, and secrets have the power to destroy… Get ready. The storm is coming.

As Tate Johnson works to find a balance between his ambitions for political office and the fallout of his brother’s betrayal, Zeke is confronted with his brother Chase’s return home. And while Bryce and Tara Douglas try to hold onto their marriage, Kristin continues to entice Travis into breaking his vows…