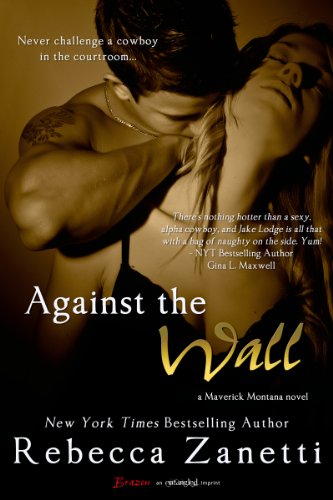 Never challenge a cowboy in the courtroom…

Surveying the proposed site for a high-end golf course should have been a breeze for spunky landscape architect Sophie Smith. But when this born-and-bred city girl is literally swept off her feet by a sexy cowboy on horseback, she realizes country life has some serious (and seriously steamy) possibilities. That is, until she finds out exactly who her smoking hot wrangler really is.

Tribal lawyer Jake Lodge is desperately trying to block the development. And if that means playing hardball, so be it. But Sophie is a distraction he didn’t expect. A distraction that makes his blood burn. Two different worlds. Two opposing sides. And when they finally give into temptation, the consequences will shake the foundations of both of their lives…

Against the Wall Excerpt 1:

The silence bordered on bizarre.
Shouldn’t there be crickets chirping? Birds squawking? Even the howl of a hungry wolf in the muted forest? Of course, such sounds would send a city girl like Sophie Smith barreling back through the trees to her rented Jeep Cherokee. The quiet peace had relaxed her into wandering far into the forested depths, but now the trees huddled closer together, looming in warning.
A breeze chilled her hair. Enough of this crap. Sophie’s heartbeat picked up a rapid staccato rhythm. Silence beat against her, and with her instincts on full alert, she whirled around on the rough dirt trail. Time to head back to the car.
Her only warning was the crack of a stick under a powerful hoof, a thumping, and a shouted, “Look out!” A broad arm lifted her through the air. The arm banded solidly around her waist, and her rear slammed onto the back of a rushing horse. She yelped, straddling the animal and digging her hands into its mane. The image of the man attached to the arm flashed through her brain, while his rock-hard body warmed her from behind.
A cowboy.
Not a wannabe cowboy from a bar in the city. A real cowboy.
The image of thick black hair, hard-cut jaw, and Stetson hat burst through her shocked mind as muscled thighs gripped both the back of a massive stallion and her tingling hips. The beast ran full bore over rough ground.
Only the sinewed forearm around her waist kept her from flying through the air.
This wasn’t happening. Sophie shut her mouth on a scream as the powerful animal gracefully leaped over a fallen log and her captor pulled her easily into his solid body. He moved as one with the animal. Her thighs clenched the horse’s bunching muscles with a strength that would have made her personal trainer proud. She slammed her eyes shut against the rushing wind. Her hands fisted the silky mane like it was a lifeline to reality.
Maybe it was.
Horse hooves beat the ground. The sun nearly blinded her as they sprinted into a meadow with wheat stocks waving in the breeze. Reality pinpointed with sudden clarity, the world focused, and fear pummeled her into fight-or-flight mode. She threw back an elbow and twisted to the side.
“Stop.” A deep voice issued the command as warm breath brushed her cheekbone.
His voice was cowboy sure. Well, at least what she thought a cowboy would sound like. His strong body held her securely in place, and she stilled, more than a bit startled as warmth pooled low in her stomach. Her face flushed. Her breasts tingled.
Was she going crazy? Some crazy cowboy was kidnapping her, and she found his voice sexy? Man, she was going nuts—or into shock.
Darkness reigned again as they plunged back into the cool forest. With a mere tightening of his thighs on the great animal, they skidded to a stop. The arm trapping her shifted so she slid easily to the ground and stayed around her waist until she regained her footing. With a sound that was more growl than gasp, she backed away from man and mount until she collapsed against the bark of a towering tree. The horse tossed his head and snorted at her retreat, his sweaty flanks heaving in the sudden quiet.
Sunlight filtered through the branches and fully illuminated the male before her. He sat straight and tall on the animal. Dark and curious eyes considered her.
At least, she hoped that was curiosity..

Against the Wall Excerpt 2:

“Oh man, did I miss Buttercup?” Tom glanced toward the far field.
Sophie shook off old memories and laughed. “Yeah, a few minutes ago.”
“Darn it. Who won the bet?”
“What bet?”
“On how long it took Jake to take him down.”
“I don’t know.”
Tom shrugged. “I would’ve heard if I won. So how was your date with my son?”
“It wasn’t a date,” Sophie protested as Colton wrestled with the newest steer while Jake remained ready on the sidelines.
“Pity,” Tom murmured. “It’s about time that boy had some fun.”
“He’s having fun now.” Sophie nodded toward a grinning Jake. White teeth were illuminated against trails of dirt and sweat.
“He sure is,” Tom agreed. “But I meant the other kind. I thought he might finally be moving on.”
“Moving on?” It wasn’t any of her business, but…
“After Emily died, well, we wondered if he’d ever smile again. But he had Leila to worry about.”
“He mentioned his wife died young.”
“Too young. Way too young to learn what matters in this life.” Soberness mellowed Tom’s words as Colton jumped back from a newly released steer.
“Which is?”
“Hawk, to your left,” Tom called out, tensing until the young man shifted away from kicking hoofs. He returned to their conversation. “You know, learned what’s important. People. Memories. Family.” Tom focused over the fence and acknowledged Jake’s nod with a nod of his own. He turned toward Sophie and extended an arm. “That was the high sign from Jake. Why don’t I escort you over to the picnic tables? He’ll be along shortly.” All around them people stepped back from the fence, though most kept their attention on the pen.
“High sign?” She took his proffered arm and jumped from her perch.
“The next three steers are known kickers. Tulip always goes for the crowd.”
“Tulip?” Sophie chuckled.
“Yep. Tulip, Snuggles, and Lola. The boys have a sense of humor.”
Sophie shook her head as she allowed Tom to lead her across the road to the picnic tables. The walk took some time, since they stopped to chat with people along the way; most had heard of her, some asked about her date, and all seemed to like Tom.
Bright red-, yellow-, and blue-checked cloths covered massive tables where people dug in to delicious-smelling chicken, steak, and sweet fruit salad. Children ran around gleefully while elderly women patted babies and people chatted. Several were obviously of native descent, but just as many people were blond with blue eyes. The whole county must have been in attendance.
“Here we are,” Tom said as they arrived at a table where a petite Native American woman uncovered plastic containers. “This is my wife, Loni.” Pride filled his words.
“Hi.” Sophie released Tom’s arm to extend a hand to the pretty woman. Jake’s eyes gleamed from a tanned oval face with delicate features and a genuine smile.
“It’s nice to meet you, Sophie.” Loni smiled and shook her hand. “Please sit. The boys should be along shortly.”
Sophie sat and studied Jake’s mother. Intelligence that matched Jake’s glimmered in her eyes. Sophie took a sip of the sweet, tart lemonade she offered. “Thank you.”
“Sure. So what did you think of the branding? Did you see Buttercup?”
“Yes. Very impressive.”
“I heard Quinn won the bet,” Loni informed her husband.
“Again?” Tom rubbed his chin. “Man, that boy has a second sense about that stuff. Unless…”
Loni shook her head. “He and Jake are not in cahoots, Tom. Give it up.”

Reviews for Against the Wall:

** “In a promising start to a new series, Zanetti brings forth something sweet and spicy for readers to devour. If small town romances are your favorites, then do give this book a shot. You cannot go wrong with a cowboy hero!” Four Stars – Annie from Under the Covers

** “I really enjoyed this book, practically devoured it, I got hooked with the story from the beginning.” Five Stars – Marulett on Goodreads

** “Rebecca this is a grand slam in my opinion and I’m giving it 5*. Kudos to you. I absolutely can’t wait for the next installment.” Five Stars – Anna-marie Buchneron Goodreads