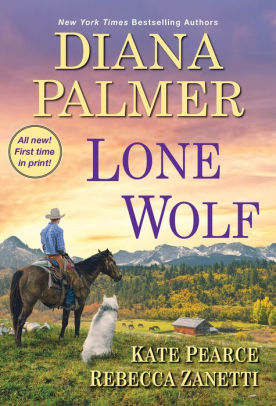 Loyal as a wolf—and just as strong and untamed—three solitary heroes are about to meet their perfect partners, in this thrilling collection from a trio of New York Times bestselling authors . . .

COLORADO COWBOY by DIANA PALMER
Fleeing her mother’s killer, Esther Marist ends up at a rugged stranger’s cabin. A wildlife rehabilitator with a menagerie that includes an elderly wolf, Matthews isn’t the type to turn any creature away. As Esther heals, she realizes how much danger she’s brought to his door—and how far he’ll go to protect her.

THE WOLF ON HER DOORSTEP by KATE PEARCE
Beth Baker senses her grumpy summer tenant must be in trouble when his pet wolf shows up at her door, demanding she follow. Conner O’Neil, solitary and stubborn, doesn’t want Beth’s help—but only he can show her how to trust again.

RESCUE: COWBOY STYLE by REBECCA ZANETTI
Trent Logan has his ranch, his friends, and his wolf, and that’s more than enough—until a shivering city girl runs into the Cattle Club to escape a Wyoming storm. Her eyes hold a world of secrets, and he’ll have to face the demons of his own past in order to save them both.

Other Books in the Redemption Wyoming Series

Fascinating read by Ms. Zanetti. This author turns men into warriors, protectors, and family with the stroke of a pen. ~ Fresh Fiction

RESCUE: COWBOY STYLE is a fast paced, intriguing, and energetic story line. The premise is intriguing and entertaining; the romance is sweet and seductive; the characters are engaging, charismatic and numerous. ~ The Reading Cafe

These passionate tales will have romance fans hooked. ~ Publishers Weekly

Bravo again to Rebecca Zanetti for creating characters that pull at your heartstrings and make you want more!!! ~ Amanda Larsen

This story was fast paced, sexy as ever, and was a generally delightful read. Rebecca Zanetti’s story is scrumptious and I want MORE! ~ Marie Brown

A delightful mix of action and emotion. ~ Kson