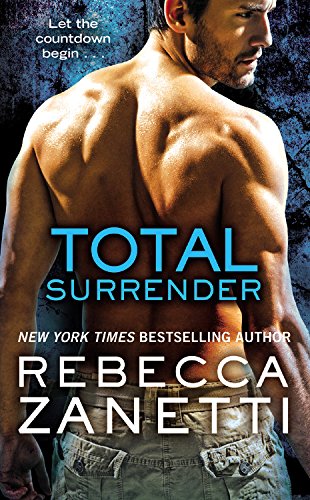 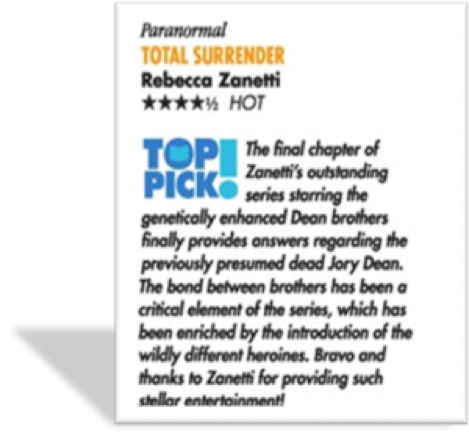 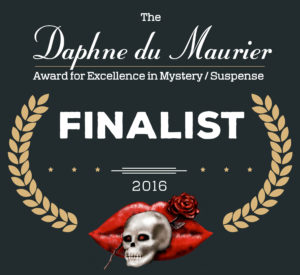 Piper Oliver knows she can’t trust him. They warned her that the tall, dark, and sexy black-ops soldier Jory Dean would try to win her over with his steel-gray eyes and deadly charm, but she won’t be conned by this man they call a traitor. All she has to do is figure out the science necessary to save his life, and she’s done. Something isn’t adding up, though, and she won’t rest until she uncovers the truth-even if it’s buried in his deep, dangerous kiss.

A passion she can’t resist…

Jory will do anything to reunite with and save his brothers—even kidnap the gorgeous woman who’s working to deactivate the deadly chip in their spines. But the forces determined to destroy his family won’t let them go so easily. Keeping Piper alive is more than he bargained for—and so is his burning desire for her. But with every second bringing him closer to certain death, can he afford to lose himself in her hot and willing embrace?

A soldier entered the room outside Jory’s glass-walled cell first, followed by a woman in her mid-twenties, who slid out from behind him.
Jory’s breath caught in his throat. Exquisite. For once, that word could be applied accurately. She stood to about five foot six in black boots wearing a matching leather jacket. Light mocha-colored skin, curly black hair, and eyes greener than the most private parts of Ireland.
She took one look at him and stepped back.
He moved forward in the cell and flashed a smile that made her eyes widen. If he had to scare her to make her leave, he’d do it. Anybody seeing him in captivity would be killed by the commander after serving their purpose. So he forced sexual tension to filter through the room.
How he could do it, he wasn’t sure. Maybe pheromones and bodily heat waves, and the ability came easier now than it had before the coma. It was a hell of an advantage to use sometimes, and he ignored Madison’s quick intake of breath when he employed it.
“Is she for me?” he asked, forcing his gaze to run over the newcomer’s body and surprising himself when he hardened in response. God. He’d been on a mission and then in a coma for two years before spending time in captivity recuperating. When was the last time he’d gotten laid? Way too long ago.
He’d always liked women, although he’d never gotten close to one. Not really. They were either part of a mission or worked as doctors in the facility, and those certainly couldn’t be trusted.
This one was petite with delicate bone structure and clear, intelligent eyes. Whatever her purpose, she sure as hell didn’t belong in the dismal place. Hopefully she’d turn on her heel and get out since he’d leered at her.
Instead she lifted one eyebrow. Her face flushed. “So that’s him.”
Well, damn. Another angel with the heart of a demon. A pang landed squarely in Jory’s chest. Beauty should never be evil. “Yeah, that’s me,” he murmured, dropping the sensual attack. “Who are you?”
She opened her mouth and shut it as Dr. Madison shook her head. “It doesn’t matter who she is,” Madison muttered. Grasping the woman’s arm, Madison led her over to a computer console. “Get to work, and remember the rules.”
The woman jerked free and stepped away from Madison. She eyed Madison like an opponent in a boxing ring—with wariness and determination.
Jory frowned, and his instincts started to hum. Was the woman a prisoner, like him? Maybe he could gain them both freedom, with her help. She was outside of the cage, now wasn’t she? He smiled.
Dr. Madison glanced back toward Jory, her gaze narrowing. “Leave her alone to work, and I won’t have you tranquilized again.” With that, she allowed the soldier to escort her from the room, and the door nicked shut behind her.
The woman sat at the console and turned toward him. “Piper. My name is Piper.” She eyed the partition. Her voice was smooth and sexy…feminine. She guarded her expression well. “They didn’t give me your name.”
Yeah. They wouldn’t have thought to give his name. “Jory.” He really liked the way her tight jeans hugged her curves, and he appreciated the intelligence sizzling in those spectacular eyes. She’d have to be smart to help him escape. “Why are you here, Piper?”
She exhaled slowly and stretched out her fingers. “I’m here to save you, Jory.”. 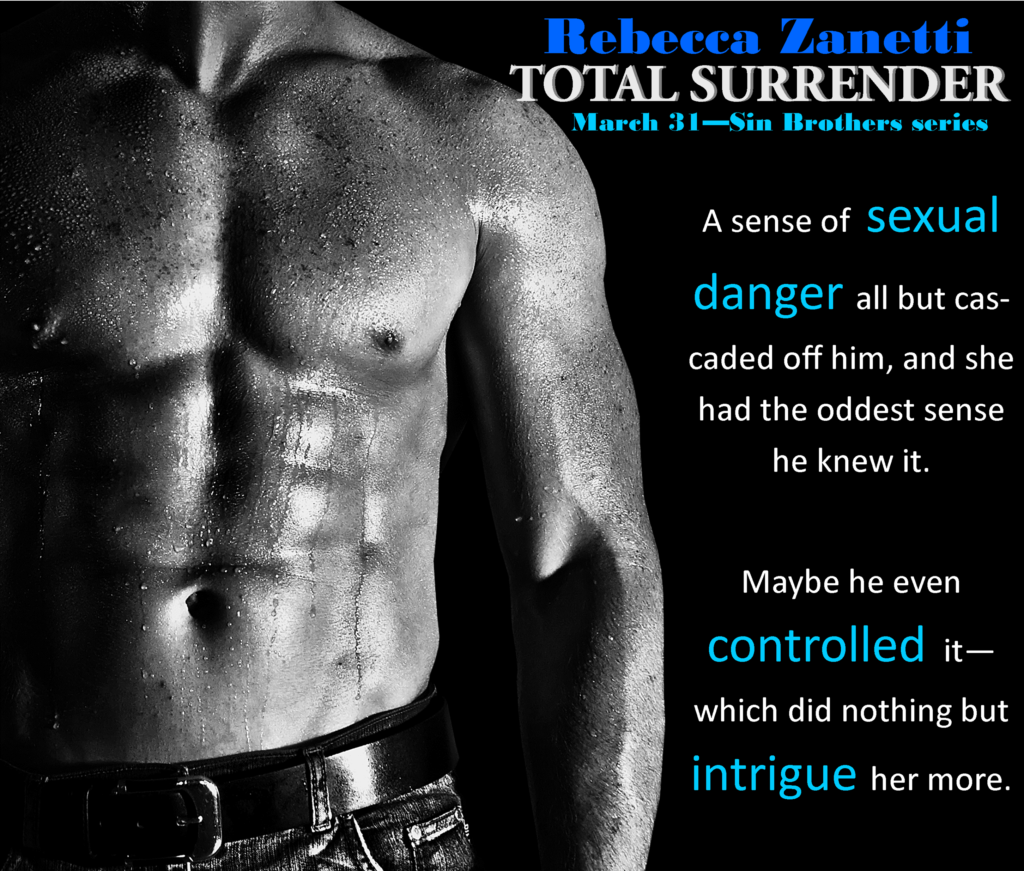 She swallowed. Something sad, something so damn feminine in her wanted to kiss his hurts. To smooth the pain away. No matter the mistakes he’d made, somebody had harmed him badly. More than once. “You said my father raised you with brothers, and he said he recruited you at eighteen and gave you soldiers as brothers—who you betrayed.”
His back stiffened. “I’ve never betrayed my brothers.”
It sounded so much like Jory was telling the truth. “I don’t know who to believe.”
“I know, baby.” He sighed and stretched. “I’m sorry.”
So was she, and even the thought of doubting the father she’d always wanted to know flushed her with shame. But Jory didn’t seem to be the cold-blooded killer her father had described. She had to get some answers. “How long you been a soldier?”
Jory turned around, eyebrows raised. “My entire life.”
It probably felt that way. Three scars from what appeared to be bullets marred his chest but somehow had missed the intricate tattoo right above his heart. “Pretty. What does it mean?” she asked.
“Freedom,” he said, his voice a low rumble.
Heat flared again to her face as she tried to keep eye contact. She would not look lower than his chest. Or abs. “Not shy, are you.”
“Nope.” His grin turned charming into something lethal. “Your turn.”
She was a grown-ass woman. A computer genius, and she’d certainly seen a nude man before. Yet her hands shook, and her eyes actually stung with the need to look lower.
Do. Not. Look. Lower
Holy fucking shit. She looked lower. The guy was built. Really, really, really built.
As if sensing her perusal, his cock perked up.
Oh God.
Her gaze flew to his face. Humor lit his odd gray eyes, and he barked out a chuckle. A totally comfortable, making fun of himself, male chuckle.
Her heart thumped—and warmed. “You have got to put something on.”
“I’d love to put something on,” he murmured, his voice lowering to hoarse and hot. Those eyes darkened to the color of the storm clouds outside, lit within from heat. A whole lot of heat.
A shiver wandered down her spine, and her thighs softened. She ignored her traitorous body and rolled her eyes. An impish part of her would love to take him by surprise and agree, but he’d no doubt meet her halfway, and then she’d be in a pickle. So she went for defensive, unable to keep her lips from twitching. “Knock it off.”
“I can’t seem to help it.” Good humor creased his cheek. Yet he sighed and turned to rummage through a cupboard near the fireplace. Seconds later, he’d wrapped a worn flowered blanket around his hips.
He should’ve looked ridiculous, yet the feminine cover-up just enhanced his wildness.
And something wild lived in Jory. There was no question.
A part of her, one that she’d tried to tame with logic and computer science, perked up. Temptation to meet his wildness with her own warmed her core and softened her thighs.
His gaze grew predatory, as if he sensed the battle waging inside her.
Her heart beat hard enough to speed up her breath. The storm raged outside, while the fire crackled inside. She swallowed, trying to control herself. Enough of this silliness. “Turn around.”
He turned around, once again revealing his warrior’s back.
The man embodied danger, and she had to keep that foremost in her mind. Most serial killers were sexy and charming, too.
He snorted.
Shit. She’d said that out loud. Her fingers cramped when she shoved off her wet clothes, hurriedly wrapping the rough blanket around her. Why did he make her feel like a bumbling innocent? “Um. Okay. I’m not a virgin for Pete’s sakes.” She mumbled the last.
He laughed again as he turned to face her.
She frowned. “You heard that?” How in the world? She’d mumbled so quietly she couldn’t even hear her voice, and yet he’d somehow heard her? Supersonic hearing wasn’t possible, was it?
“Yes. I’m not a virgin, either. Was that an invitation, by any chance?” Boyish hopefulness curved his lips.
Hell. There wasn’t anything boyish about the man standing strong and sure, the fire lighting him from behind. “No.” Her nipples hardened in pure denial to her words. “Not a chance.”
His gaze penetrated her, and a long shiver wound down her spine. His gaze darkened. Yeah. He’d seen the shiver. Damn it.
“Are you sure?” he rumbled.
Her voice trembled. “Yes.” 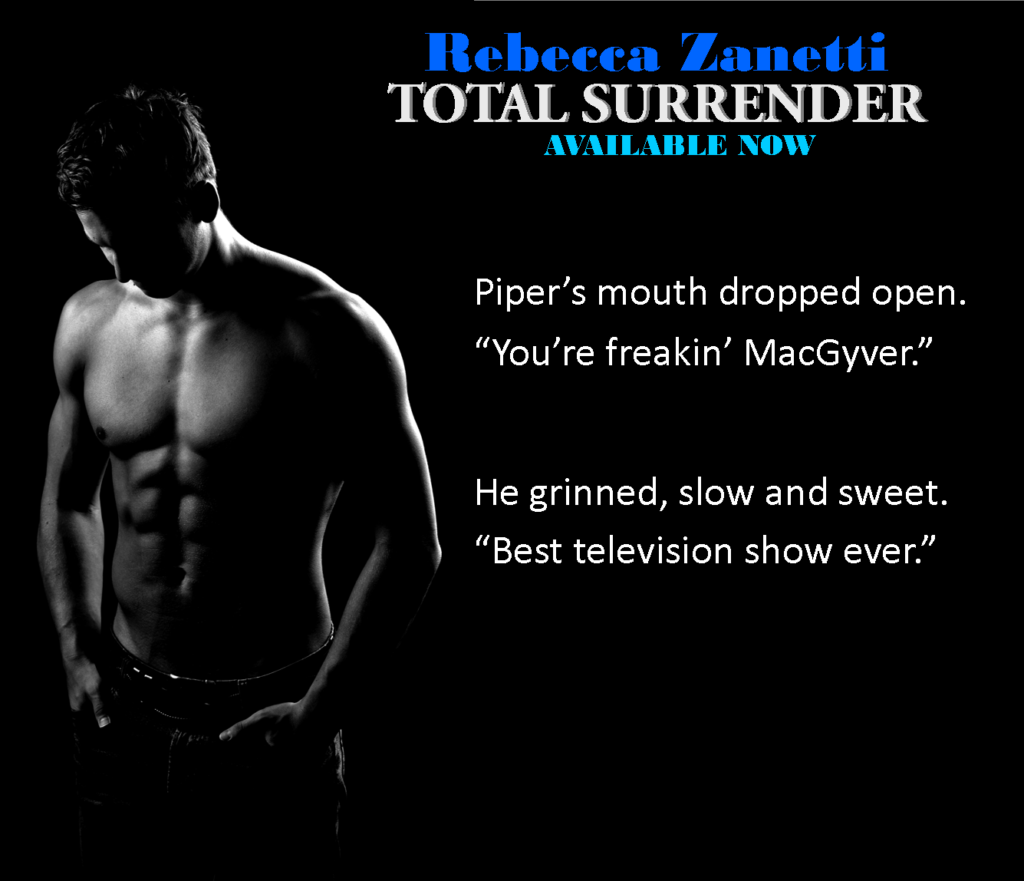 “The final chapter of Zanetti’s outstanding series starring the genetically enhanced Dean brothers finally provides answers regarding the previously presumed dead Jory Dean.  The bond between brothers has been a critical element of the series, which has been enriched by the introduction of the wildly different heroines.  Bravo and thanks to Zanetti for providing such stellar entertainment!”

I thought Zanetti did a fabulous job wrapping up this storyline for the Sin Brothers books. ~Book Pushers

This series is a TOP recommendation by K & T!!

I am in awe of the world Rebecca Zanetti created with her Sin Brothers.   ~KT Book Reviews

Total Surrender was really fast paced, it wrapped up a few things that had been lingering throughout the series and I loved Jory and Piper – they are my favorite couple from the series.~Red Hot Books

Can’t wait to see what maybe next for the Sin Brothers. If you love them like I did please make sure to pick up a copy of Total Surrender and make sure to tell EVERYONE about this series. ~Books-n-Kisses

Wow! Loved this book, and this entire series! ~Lit Slave

Just when I think Rebecca Zanetti can’t surprise me anymore, she exceeds all expectations in the final installment of the Sins Brothers series! –Elizabeth’s Book Reviews

Brava on a book (and a series) beautifully imagined and artfully delivered!  ~Grave Tells

Zanetti has a great balance of suspense, romance and soldier-y stuff…and a little philosophizing  ~Heroes and Heartbreakers

TOTAL SURRENDER is in a word … WOW! ~Fresh Fiction

What can I say about this book? Well it was awesome! Probably the best in the series.~Tea and Book

Aww, the last book in this series…so bittersweet, but wow…what a phenomenal end to the series. ~Smitten With Reading